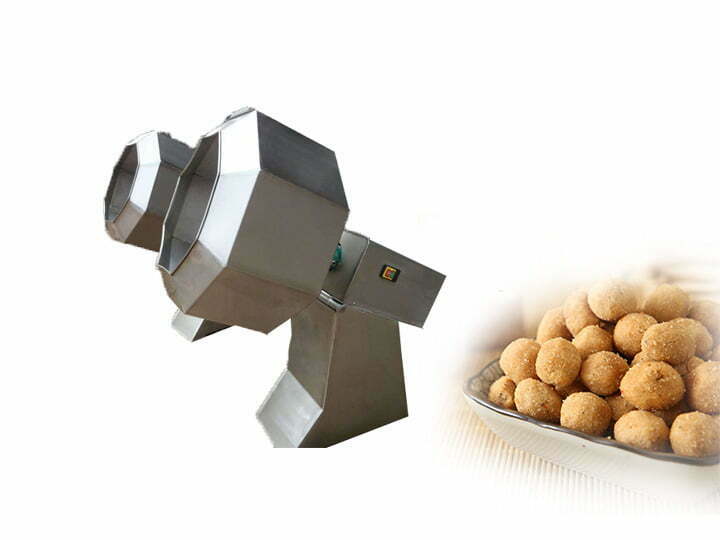 The seasoning machine is well known in the food processing industry and is used to flavor and mix various foods, such as peanuts, potato chips, puffs, potato chips, and other snacks.

The peanut swing oven is a special piece of equipment for all kinds of peanut coated roasting. Different from the previous roasting equipment, the swing oven will keep shaking during baking to avoid peanut adhesion and make peanuts evenly heated.

Peanut coating machine can also be called a sugar coating machine, widely used in the field of snack food processing. According to the principle of eccentricity, the peanut is rolled inside the pot to achieve the purpose of uniform mixing. In addition, depending on the coating material and taste, the final peanut products are also various.

Peanut butter is an ideal nutrient food with high protein and fat. The peanut butter filling machine is the final step in a series of steps from peanut to peanut butter: that is packaging the resulting peanut butter. It directly determines the consumer's first impression of peanut butter when it enters the market.

The use of the grinding machine is very wide, can grind most of the cereal products, soya-bean milk, soya-bean flour, rice milk, and so on. It can also be processed with oily crops such as peanuts. The variety of the mill also has a variety, you can according to the actual production needs to make a reasonable choice.

The cocoa powder packing machine is a machine specially designed for packing cocoa powder, mainly used in the last step of the cocoa production line. At the same time, this kind of packing machine has the unique advantages of full automation, saving time and effort, and is widely welcomed by the major manufacturers.

The hydraulic oil press is a kind of machine that presses the hot Fried material to extract oil. It has the advantages of high oil yield, no pollution to oil, and so on. It is suitable for nut products, peanut sesame, and other production lines. Usually, the oil press is used in conjunction with the baking machine.

Electromagnetic roasting machine is a new type of multi-function roasting machine, which has the advantages of low energy consumption and environmental protection. It can roast cashew nuts, peanuts, almonds, hazelnuts, and other nuts with high baking efficiency. It also has a unique temperature control system, which is widely used in the nut production line or can be used independently.

Peanut/Cocoa butter making machine is a professional grinding machine, which can efficiently grind peanut, cocoa, cashew nuts, pecan, hazelnut and other nut foods, and finally get peanut butter, cocoa butter and so on. At the same time, this machine can also be used in medicine, chemical industry, cosmetics, light industrial plastics and other industries.